The History of Lynchburg 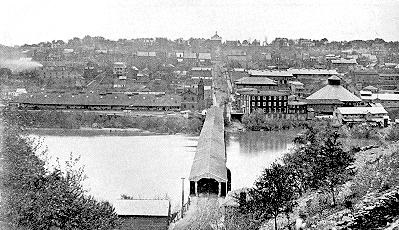 When you think of your teenage years, let’s say, between the ages of 16-18, what do you think of? When I think of that age range, I think of Home Coming, the Prom, football games, college applications, and high school graduation. Well, life was very different during the 18th Century. These events and activities were pretty much non-existent at that time.

During the mid-1700s, Americans were growing their own food. The men and boys hunted different animals such as squirrel, rabbit, bear and deer. They also fished. Most people were living in the countryside and made their living from farming.

John Lynch is the Founding Father of Lynchburg. At the young age of 17, he started a ferry service across the James River in 1957. John Lynch didn’t have any worries about which girl he was going to take to the prom or the next school game. No, he was out making a better way of living for his townsmen. The ferry carried traffic to and from London. He is also responsible for Lynchburg’s first bridge across the ferry, which eventually replaced the ferry in 1812. The ferry service did become very profitable for several years and by the end of 1783, the village at Lynch’s Ferry became an esteemed medial trade.

There was a huge slave movement that took place in Lynchburg, back in the early 1700s. Even though many Americans thought slavery was evil, they also thought it was necessary. Mostly the rich were slave owners. There were about 2,700 people in Lynchburg that were enslaved in the mid-1800s. There was a huge demand for slave labor because tobacco had become a large market value. Another move during this time was the Quakers. The Quakers, which the members are best known as, were from the Religious Society as Friends. They were said to “tremble in the way of the Lord.” A large 70% of the Quakers were slave owners from 1681 to 1705. A turnaround took place in 1688 when some of the Quakers spoke out against slavery. By 1756, only 10% of Quakers were slave owners and they furthered their stance on slavery as they worked on freeing slaves from 1755 until 1776.

Per the Library of Virginia, a law was passed in 1782 by the state legislature, which made it lawful to emancipate slaves. We fast-forward to the present, and the residents of Lynchburg, Virginia, are still speaking against enslavement. Channel WDBJ7, a local news program for Southwest and Central Virginia, broadcasted many from the community walking to abolish modern day slavery. This protest took place on October 15th, 2016. What are they protesting? Human Trafficking, which is “the illegal movement of people, typically for the purposes of forced labor or commercial sexual exploitation.” Tara Adams co-organized the walk and is quoted as saying, “It’s slavery and no person no matter who they are or what they’ve done should ever be treated like that.”

Lynchburg is about the simple life. It specializes in skilled labor force, has a low unemployment rate and a below average cost of living. This is the type of home setting more and more American families are looking for. In 2009, Forbes Magazine ranked Lynchburg over even  Chicago as the best metro area for business and careers. What is the future for Lynchburg, Virginia in 2017?