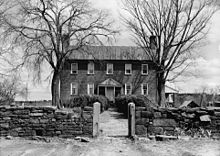 The Native American tribes of the Monacan, Iroquois, and Cherokee were the original inhabitants of the Campbell County area, but were later forced west due to the settlers' progress. Governor Willaim Gooch in 1727 created a couple of "inducements" in order to lure settlers to the Campbell County area. These inducements were that if one settled on the Staunton River "in the bounds of the newly formed County of Brunswick" then they would be freed from paying levies for ten years. The second "inducement" was that the settler could claim 400 acres simply by building a cabin on the land and by "planting a patch of grain".[citation needed]

The inducement's attempt to draw settlers was not vastly successful with the exception of a few new settlers, and the Governor soon took mention of his inducements to the ocean ports in which immigrants were arriving in America, as well as to the ports back in their homelands. This great difficulty in gaining new settlers for Campbell County is one of the reasons that the Governor allowed the Scoth-Irish immigrants with Presbyterian beliefs to gain religious freedom, in order to secure as many new settlers as possible for the newly founded county.[4]

The area that would become Campbell County was first settled by Europeans, initially Scotch-Irish Presbyterians, in the late 1730s. After nearly fifty years of immigration and development, the newly formed county was established in 1782 from part of Bedford County , and was the first county formed after the American Revolution.[5] Campbell County was named for Revolutionary War hero, General William Campbell, who is known for the 1780 Battle of Kings Mountain. The independent city of Lynchburg, Virginia was subsequently formed from the county's land in 1786.[6]

Jeremiah Rust donated the land that would become the county's seat named Rustburg.[7] The towns of AltaVista and Brookneal were created due to their business advantages as well as the "intersection of trails". Altavista was planned by a group of businessmen in 1907, due to its "strategic" location and "potential" as a new location for a railroad.[8]

From its earliest days, the county relied on tobacco as the primary cash crop and basis for the economy, though it also developed early manufacturing operations. Brookneal, with its strategic location on the Staunton River, was long an important tobacco and textile hub. However, the departure of manufacturing and the changing tobacco market has forced Campbell to transform from a mainly agricultural area into a mixture of suburban and rural communities.[6] Campbell County was also an iron manufacturer and begun operations Pre-Revolutionary War and continued operations in Oxford Iron Works until it was closed in 1875. The building is still standing today.[9]﻿

Find a Home in Campbell County